Villages steeped in tradition alongside beautiful beaches and architectural gems, Eastern Crete has the perfect combination. 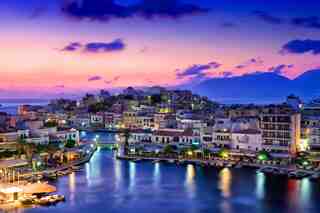 With blissful views over the Gulf of Mirabello, these luxury villas and suites on Crete combine the facilities and services of a deluxe resort with the welcoming ambience of a...

Even by the standards of an island that boasts plenty of it, there are those who consider Eastern Crete to be especially charming. It offers much of what the western area provides but at a slightly more sedate and less developed pace. Villages steeped in tradition, mountain gorges, secluded coves and architectural gems from the pages of history as well as some seriously fine beaches and great walking are among the numerous attractions in a region less rugged and populous than elsewhere – something that appeals to and enchants those looking for a slightly quieter Cretan sojourn

East of the capital Heraklion and flanked by three hills, Agios Nikolaos boasts an appeal bound-up in an atmosphere that manages to successfully veer between the leisurely, bustling and arty as well as offering a flavour of a bygone time - in fact, it’s a spot you may hard to leave. But to simply stay put would discount some of Eastern Crete’s other delights – spots such as Elounda, a lively harbour town with great tavernas, welcoming bars and easy access to Spinalonga Island; the village of Plaka in the stunning setting of Mirabello bay, and Knossos, the largest Bronze Age archaeological site on Crete and considered Europe's oldest city.

Nature abounds in Eastern Crete so it’s little wonder this part of the island is a major draw for walkers and hikers and those in search of secluded beaches and majestic canyon vistas. It’s here you can marvel at an abundance of flora and fauna, tread coastal paths, traverse high peaks and simply stop and be enchanted by truly jaw-dropping views across spectacular gorges. There are various routes available, some gentle, others more challenging but all offering an introduction to an off-the-beaten-path experience steeped in the authentic Crete and where ways of life barely give a nod to “progress” and the passing of time.

You can step back as far as 7000BC to trace Crete’s first inhabitants, although the island’s rich history went largely uncharted until British archaeologist Sir Arthur Evans made significant discoveries at the start of the 1900s – findings that included ancient Egyptian art and Archaic sculpture and numerous influences of a past spanning the industrial, artistic and cultural. It was occupation by the Venetians in the early 13th century though that brought a legacy of beautiful homes, striking public buildings and ornate monuments. In 1898 the island was made a British protectorate before becoming officially part of Greece in 1913.

Beachcombers won’t be disappointed by Eastern Crete. In fact, its beaches are at times magnificent and often enchantingly picturesque with secluded corners, clean, clear waters and a generally relaxed ambience. Along the coast at Lassithi you’ll find Vai and its striking palm forest backdrop; Istro, with a bay of golden sand flanked by a tree-clad terrain; the rather stylish Elounda with views of Spinalonga, and the beautiful bays, beaches and natural charm of Chrissi Island. And don’t forget Mýrtos - a place that attracted the hippie brigade of the 1960s and 70s and, with a stunning, secluded location at the base of Mount Dikti, it’s easy to see why.

Cretan culture has been influenced by just about everyone from the Ancient Greeks and Romans to the Ottomans. Across the island you’ll find an open-air theatre, a modern amphitheatre surrounded by pine trees and the Kaloumba Puppet Theatre but Crete also has a fine tradition of craftsmanship from basket weaving and ceramics to wood carving and traditional textiles. Noted archaeological sites will be an essential for many travellers to Greece and, in Crete, there are gems such as the Minoan palaces of Phaestus and Malia, and the Koules fortress of Heraklion. And, for bookworms, the barren island of Spinalonga was a leper colony until 1957 and the setting for Victoria Hislop’s bestseller ‘The Island’.

With delightful tavernas and traditional kafeneio (coffee houses), eating and drinking is one of the great joys of a holiday on Crete. Local cheeses are especially good but so too are trademark dishes such as dakos (a meze similar to bruschetta); Kalitsounia (cheese pies); lamb served with a wild green considered a local delicacy; Hirina apakia (smoked pork), and Gamopilafo, a rice dish traditionally offered at weddings. And don’t underestimate Cretan wines because they can be extremely fine, with refreshing whites and rich reds that are easy on the pocket and also gaining something of a reputation around the world.

It’s pretty hard not to feel an instant sense of relaxation in Crete but the eastern part of the island affords you the opportunity to been an active traveller or as much of a lounge lizard as your heart desires. If you’re idea of some R&R is exploring ancient buildings, villages trapped in time and stunningly beautiful countryside -or if you’re perfectly content with a beach of white sand and a good book or two - you won’t be disappointed. And, of course, when the call comes you’ll never be far away from a welcoming bar or taverna for some traditional home-cooked food or a timely “sundowner” (or two).