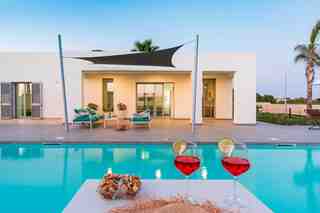 Casa San Lorenzo is a beautiful villa just a stone’s throw away from the beach of San Lorenzo, a popular seaside resort that’s halfway between the Vendicari nature reserve and the fishing village of Marzamemi. Surrounded by a well-tended garden with lush lawns and a large terrace equipped with outdoor kitchen and bbq, this charming villa is perfect for al fresco living with a delightful saltwater pool for cooling off. Recently built Casa San Lorenzo features bright, comfortable rooms, all on one level, including a modern living-dining room with kitchen, three bedrooms and three shower rooms.

The location of the property, which is within easy walking distance of San Lorenzo’s beach, allows visitors to explore the south-east of Sicily, from Noto to Syracuse and the baroque towns of the Val di Noto, to Taormina and Mount Etna’s Park

Available on request at an additional cost

Please note that the preferred suppliers for the villa must be used for any additional services. Unknown extra staff are not permitted at the villa.

An English speaking CV Representative will visit during your stay. Contact details will be sent with your travel documents.

Please refer to the Health & Safety pages on this website.

As one of the quieter destinations on the diverse island of Sicily, the south is home to some of the top, one and two Michellin star restaurants in the country. And it’s no wonder, with the abundance beautiful local produce available. As in all parts of Sicily, there is a contrast in landscape from the marshland of Vendicari to the rebuilt towns of Noto and Ragusa. Siracusa has a tradition in making puppets - buy one as a souvenir or visit the puppet theatre for some light entertainment. Or try out the range of restaurants, bars and tours for a relaxing evening with friends.

Find out more about Siracusa and Southern Sicily

Please note that there is a European tourist tax payable on arrival. Further details will be advised prior to arrival.

Having a barbecue in Italy is one of the best ways to cook your food but you may find that due to long drought periods in high season barbecuing may be restricted in some areas. You will be informed if this happens by your house staff or local representative.

CV Villas is happy to book flights for our customers on scheduled, chartered or low cost airlines from London and regional UK airports. Please ask for details.

Car hire can be pre-booked through CV Villas with collection at the airport of arrival. Please ask for details.