Ronda is the largest of the whitewashed villages that cling to Andalucia’s hillsides with olive groves and limestone peaks. 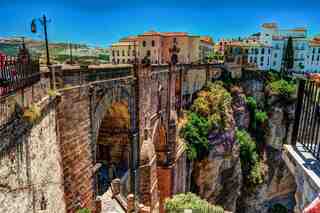 Villas in Near Ronda

View villas in Near Ronda Learn more about Near Ronda

One of oldest towns in Spain, Ronda is the largest of the pueblos blancos, the whitewashed villages that cling to hillsides in Andalucia’s Cádiz and Grazalema mountain ranges. The region was defined by the clash between Muslims and Christians, and that legacy is intensely felt on a Ronda holiday. Explore the blinding-white towns, scenic olive groves, and craggy limestone peaks, all within a relaxed drive from your Ronda-area villa.

Carved out of a cliff, Ronda is perched high above a hundred metre gorge and the River Guadalevín. More than a dozen Moorish defensive strongholds dot the region, including Arcos de la Frontera, a narrow village perched on a red-rock promontory; and the mountain town of Guacín, which has views all the way to Gibraltar, and occasionally Morocco. The Sierra de Grazalema’s fifty thousand hectares of pine and oak forests are home to a reserve for native Griffon vultures.

Things to do in Ronda

In Ronda, cross the 18th-century bridge spanning the ravine for distant views on both sides, and tour the Old Quarter’s aristocratic mansions, Arab baths, and bullfighting museum. Standout rural villages include Jimena de la Frontera, one of the region’s best-preserved Moorish architectural ensembles; and Casares, a pile of white houses climbing to a Medieval fortress. Benahavís, on the other hand, offers golfers more courses than anywhere along the Costa del Sol.

Local gastronomy is influenced by both the sea and the mountains. Asparagus and wild mushrooms come from the forest, and barbecued meats are a main-course favourite. Piñonate is a Moorish dessert served in Jimena—it is made of olive oil, honey, almonds, cinnamon, and orange peel. The restaurants of Benahavís draw diners from across the Costa del Sol. Nothing is more local than sherry; varieties including fino and amontillado make delightful aperitifs and dessert wines.

Ronda’s 1785 bullring is Spain’s oldest, and although a bullfight is not for everyone, Ronda’s bullring is an architectural marvel worth seeing. Taste and learn about the making of Jerez—the generic name for the area’s fortified wines—at bodegas (sherry houses) in Jerez de la Frontera. Equine enthusiasts should not miss the chance to watch the dancing horses of Jerez at the Royal Equestrian School.