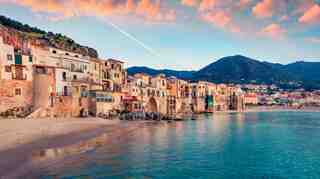 For Sicily, the ancient ‘crossroads of the Mediterranean’, viticulture is nothing new. To the Greeks, it started with Dionysus, god of wine, who sailed to Sicily with a grape vine growing in a hollow bird bone. According to records, it was the Phoenician merchants settling on the island from over a thousand years BC, bringing their knowledge of wine cultivation to start Sicily’s prolific wine legacy.

We imagine they felt they had found an oenological goldmine: a vast, opulent expanse of land with ranging climates and altitudes.The balmy weather that characterises most of the island blesses the crops with regular sunshine and good rainfall, plus the cooling coastal breezes which help regulate temperatures.

The Madonie Mountains and the unforgettable Mt Etna, an active stratovolcano dominating the skyline, both provide elevated altitudes and island ventilation, giving an elegant and fresh Mediterranean personality to the local grapes. Underfoot, the mineral-rich dark soils that come from ‘Mama Etna’ make for extraordinarily fertile ground. With this diversity of climates, soils, altitudes and topography, we can understand the Greeks’ belief that the island was blessed by the god of wine.

With such conditions, and a pedigree of winemaking stretching back thousands of years, one would assume a healthy, booming industry. However, Sicily’s viniculture has been marred by its politics. Constant invasions and a myriad of conquerors led to Sicilian wine focused only for export to the current ruling nation, considered a commodity rather than a delicacy. This culture extended even in liberation, with grape growers over the past 100 years selling grapes as an export to large cooperatives, focusing on quantity and not quality, distributed out to mainland Europe to boost thin wines. Sicily was known for bulk, inexpensive product; the island blessed by Dionysus had a reputation for bad wine.

This has been the story of an old Sicily. Over the past 40 years, the wine culture has undergone a dramatic renaissance. In the 80s local winemakers such as Diego Planeta, Giacomo Tachis, and a new generation of producers focused on quality, even if lower-yield. Slowly, the island’s viticulture rose in prominence. International recognition came, even awards, particularly for the wines of Mt Etna and indigenous grapes such as Nerello Mascalese and Carricante. With recognition came investment. Old vines were being revitalised, and new sites were being planted. In 2011, the creation of DOC regions in Sicily cemented the island’s place in the international community. Suppliers now are filled with positivity, the energy is electric, long dinners with feverish conversations about local grapes and new projects fill the Sicilian evenings.The island’s reputation had been repaired.

Now, the industry is not only flourishing, but also leading the way. Local producers are pioneering sustainable vineyard management. Firriato became the first carbon neutral winery in Italy, and 34% of the island’s vineyards are organic. Many now follow sustainability protocols around energy, water consumption and carbon emissions, spearheaded by one of the island’s legendary wineries Tasca d’Almerita.

Italian wine culture follows much like Italian culinary culture: steelfast dedication to traditional recipes. While international grapes play a key part of Sicily’s industry, they are only a temporary mistress. The real love affair starts and ends with its indigenous grapes.

Nero d’Avola is the king red grape, widely planted across the island for its deep flavours of dark fruits and spice. Red-producing vineyards are found moreso in the west, further away from the cooling altitudes of the eastern mountains. CV are proud to represent several villas in this western region, all of which are great places to base out from to visit the local wineries and vineyards. Alongside the many DOC regions sits Menfi, a quaint comune with a gorgeous coastline and reputable position in the wine community. Here you’ll find Sicily’s oldest wine festival, wine and food workshops and appearances by leading Sicilian chefs, and a winery from Planeta, one of the island’s leading producers. Also nearby is the previously mentioned carbon-neutral winery Firriato. Only 2km from Menfi, Villa Inzolia would be perfect to accommodate the intrepid wine explorer while they investigate the region.

The west is also known for Marsala, the famous fortified wine loved by Thomas Jefferson. Its primary base blend consists of Grillo, Inzolia, and the leading white grape of Sicily: Catarratto. By itself, it creates a lovely soft and dry wine. Cultivated throughout the island, Catarratto can be found especially in the high altitudes of the fertile mountainous east. Here you can stay in Casale Catarrato, nestled in the foothills of Mt. Etna and named after this much-loved grape. This villa is close to everything: mountain-based wineries, one of the world’s oldest Greek amphitheatres, and it overlooks the bustling tourist town of Taormina. The aforementioned Planeta are also starting their newest project nearby in Mt. Etna. If you can, try to cross over to the north end of the island and ferry over to Lipari, where the Tenuta di Castellaro winery is a must visit.